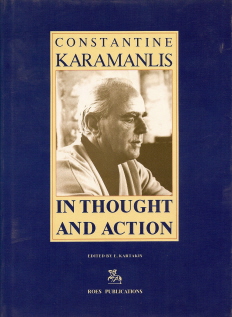 Constantine Karamanlis dominated the turbulent postwar history of Greece. Having a key-role in the Greek public life for decades, not only did he pave the country’s way towards a unified Europe, but also reformed, modernised and strengthened its democratic institutions, thus earning the respect of his compatriots and foreign leaders alike –the latter including personalities such as General Charles de Gaulle, President Giscard d’Estaing, and Chancellor Helmut Schmidt–, being equally praised by intellectuals such as Maurice Genevoix, Chris Woodhouse, and Raymond Aron.

This book,  full of photographs illustrating all stages of his unique career, offers the most complete and in-depth kaleidoscopic overview of Constantine Karamanlis’s thought and action, containing information on both the historical and personal aspects of his life.